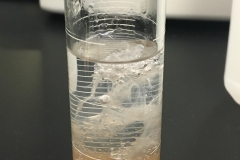 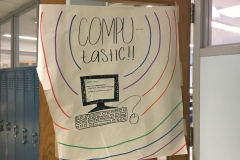 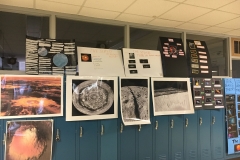 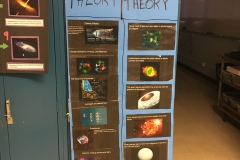 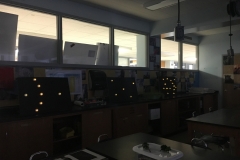 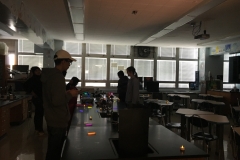 Members of SNHS were in charge of various experiments, like “It’s in the Genes” or “Don’t look Up or Down,” held in A-Wing. Throughout the day, families from the community attended the event and tried out the experiments for themselves. Most of the activities were simple and could easily be done at home.

“My favorite activity would have to be the ‘Elephant toothpaste and Diet Coke and Mentos.’ We take Diet Coke and put different amounts of mentos in each Coke bottle. The more mentos that there are, the bigger the explosion is,” senior Michelle Rihani said.

Not only does Science Day serve as a fun learning activity

for families of Des Plaines, but it also gives students a chance to spread their enthusiasm for science to others.

“Science Day is probably my favorite. It’s fun to see how members of the community come to see what the students do and it’s rewarding to see the students interact with younger kids. Students really enjoy it. They like seeing the kids get excited because it reminds them why they like science in the first place,” SNHS sponsor Philip Sumida said.

STEM — science, technology, engineering, and math — occupations are expected to increase by 2.8 million by 2020. As a way to not only indulge these interests of high school students but also prepare them for a possible future, SNHS was created three years ago. Students took an initiative by approaching Jay Payne, science department head, and asking him if they could start the organization. After that, science teachers Sumida and Dan Fraker volunteered to be the sponsors.

Science National Honor Society hopes to recognize students that have an interest in the four different fields and give them opportunities to explore the diverse domains. In order to do so, the group organizes field trips at various research facilities, brings speakers such as scientists from around the world to talk to the group, and participate in contests and competitions like the Rube Goldberg competition.

The Rube Goldberg competition is when teams create an overly complicated machine that accomplishes a simple task. Last year’s competition was held at the University of Illinois in Urbana-Champaign, in which the task was to build a machine that put coins in a piggy bank.

“My favorite part was seeing it finally work. These machines take a really long time to build and you have to do a lot of test runs and tweaking. It just feels so rewarding seeing it work for the first time,” senior George Espinoza said.

Warriors On and Off the Mat

Check this out! West's favorite books dive into contemporary issues